American football in China has been growing exponentially during the past 8 years. This growth can be traced to its beginning in 2011, when the 1st adult competition of this new era (The Founders Bowl) was played between the only 2 adult teams in China the Shanghai Nighthawks vs the Beijing Guardians, and in the past 30 days there have been over 3 national championships played between over 50 adult teams across the main 2 leagues at this time (the Shanghai Warriors for the AFLC and Tthe Shanghai NighthawksCity Bowl League). If we add the teams that participate at the college level (CUAFL), NFL Flag Football tournaments, and youth the numbers are approaching the 120-figure mark.

In this post, we will cover the main leagues, stats from the 2018 season, and links to some of their official websites for each one of them. The sources used for this article will be listed below, in order to give the readers a 1st hand access to this information (Note: most of these accounts are in Chinese) 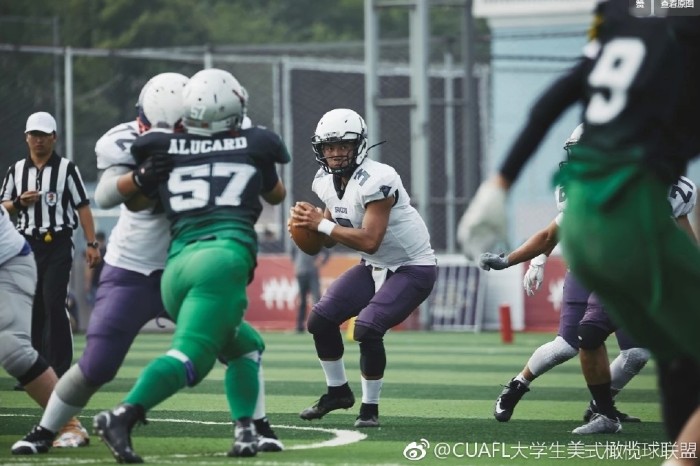 2016 CUAFL Final between the Sakers vs Aurora

The CUAFL started as the “Big 4” in 2013, as a tournament organized by Shanghai Jiaotong Universty (Lions), Fudan University (Dragoons), Shanghai University (Bombers), and Tongji University (Strikers). During the 1st itineration’s of the tournament, these 4 teams had a head to head competition and the winner was based in W-L record. After 2013 season the CUAFL was launched as a 1-year tournament that follows the Chinese school calendar, having their regular season games during autumn, winter and early spring, and the final game is played before summer vacations.

The CUAFL has grown from 4 to 10 active teams in their last season, with each team having an average of 6 games plus 3 more games to reach the final. While there has been 15 teams that played in the CUAFL, some teams have not continued participating and others decided to play in other leagues. For more up to date information, you can visit China Blitz (Chinese only) or visit their official Weibo account.

The CUAFL follows a slightly modified version of the NCAA rule book, with one of the main additions being that they have a limit of 3 foreign players on the field during a game, and a max of 8 foreign players registered during each semester.

It’s worthy to note that while the CUAFL is the main league for college teams at this time, there are other organizations that sporadically have held tournaments between “in-house” college teams, such as the AFU (American Football Union) that only allow Chinese players to participate in these competitions.

Founded in 2013 with 8 teams and 2 divisions, the AFLC has expanded to 20 teams and 4 division in their 2018 season. The AFLC is the strongest league in China at this time, having teams with some ex NCAA players, and local players that have been drafted for the Chinese Arena Football League in multiple occasions. The latest itineration of the AFLC final had the rematch between the Shanghai Warriors and the Shanghai Titans, having the Warriors come out with the victory in the 1st OT in AFCL Championship History, and their 3rd Championship in team’s history. You can find an article about it here.

During its 2018 season each team had an average of 4 regular season games, and

between 3 to 4 more games in order to reach the final. Out of the previous 6 finals, 5 of them have been between Shanghai teams, and only the 1st final had a team from outside that city, the Chongqing Dockers.

The AFLC follows also a similar set of rules to the NCAA and the IFAF, with minor additions. Similar to the CUAFL there is a limit to the number of foreigners on the field, being 5 at any given time. At this time there is no restriction to the number of foreigners register per season, being the only rule that in order to participate in a playoff game the player must have been part of a regular season game.

As a non-professional league, the AFLC teams do not pay their players or coaching staff. For more information you can check the following links: China Blitz and their official Facebook page

At this point the City Bowl is still the largest and most widely distributed league in China, having 33 teams at the beginning of the 2018 season, and now listed as active teams 25. The main difference between the 2 adult leagues is that the City Bowl has a ranking approach similar to the NCAA, where teams are ranked based on the strength of their schedule. These schedules are set and coordinated between all the captains and general managers at the beginning of every year.

In 2015, some of the teams that originally participated in the AFLC decided to re-establish a new league, limiting the number of foreign players to 3 at any given time during the game, and using the ranking system as the first method to choose the champion of that season. After that City Bowl League added a set number of playoff games amongst the top teams culminating in the City Bowl Final. During the past 3 finals, there has been always a new champion.

The City Bowl Teams play in average 6 to 7 games during their regular season, starting in April until October, after that the top teams go into a playoff bracket based in their rankings and the final takes place at the end of the year.

Similar to the AFLC, the City Bowl is a non-professional league and the teams do not pay their players or coaching staff. For more information about the league, you can check the following links: City Bowl Official Website, and China Blitz.

The Arena Football League had a series of official games during their 2016 season, and they hosted 2 more combines for the 2017 and 2018 season but no games were played. At the time of this article, the CAFL has announced that they will be launching 2019.

China has also competed in the World University Championship and the U19 Tournament with the support of official government organizations. These teams are usually organized by special committees that have changed in the past years.

Finally, the youth leagues in China are growing at such a fast phase that there is no official number at this time but the estimates indicated an average of 20 000 kids were playing American football in China during the 2018 season, between flag football and tackle football in the multiple schools and football academies. 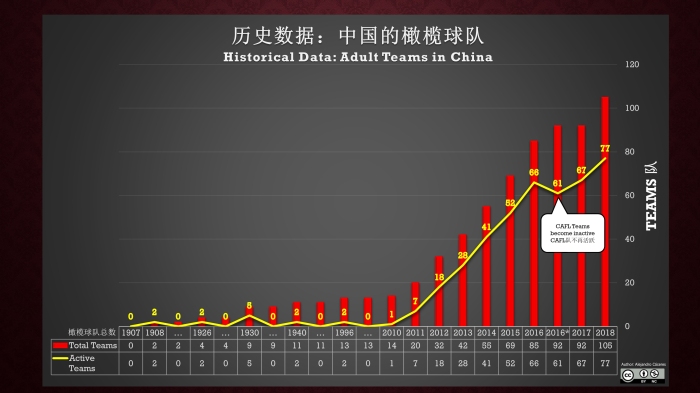 All these teams, players, and leagues have been growing constantly, not only in regards of numbers but talent and their fan base. In some publications by USA journals, there have been comments in regards to hosting an NFL game in China, a future that doesn’t seem too crazy anymore.